Just about a year ago today — a year ago this Thursday, to be precise — I found out The Magazine of Fantasy and Science Fiction bought my story “Just Do It”.

I wasn’t in Seattle to stalk my mailbox this year, but there was still yelling and hooting this evening when I discovered my most recent story, “Atalanta Loses at the Interpantheonic Trivia Bee”, found a home at F&SF.

This is the kind of annual event a girl could get used to.

I got to hear Katie read her story “I Believe” at Cascadia Con just about a year ago. It was beautiful then, it’s beautiful now, and you should go read it.

What do you do when you show up at will call for Spamalot and it turns out the concierge got your tickets for the next night? You don’t sigh, you don’t cry: you fortify the buzz you developed at dinner with another pint, create an artificial quest and head to the Marble Arch, then photograph your way down Oxford Street.

The sign on the inside door of the train used to say:

Obstructing the doors can be dangerous.

But someone has scratched out a few letters, and now it looks like:

Obstructing the doors can ## #anger#us.

I was in the restroom at the Euston British Rail station, needing to primp after all the train-hopping from Canary Wharf.

I dropped my bag on the counter and then dug around for a hairbrush, vaguely aware of a mirrored row of sinks behind the bag. I found the brush, looked up, and saw — nothing.

Well, I saw stalls, and sinks, but my reflection was missing.

That’s how I processed what I saw: I don’t have a reflection.

Which was, of course, ludicrous. I’m not a vampire.

So my brain immediately corrected: This surface isn’t reflecting me. Which seems the same, but is entirely different from a problem solving point of view.

We’re talking about less than a second of time here, and inside that second I started to reach for what I knew about light waves and specular interfaces and I wondered what kind of material could behave so oddly…maybe the surface was just projecting a manipulated digital image…but it’s so clear and why would anyone bother —

— and that’s when the obvious leapt in, and I realized that the restroom was designed with such unbroken bilateral symmetry that I assumed there was a mirror between the two rows of sinks in the middle of the room.

Now here’s the interesting bit, the thing that didn’t occur to me until I wrote this out: the fantasy-oriented explanation for what I took to be weird phenomena was dismissed out of hand in favor of a science fictional explanation. And for a while I thought that revealed something about my unconscious loyalties on the F & SF spectrum.

Then again, the fantasy explanation was the first through the door…so what does that tell me?

I was sitting at the desk in my apartment (writing, mind you) when I noticed a thumping noise. I tuned it out, figuring it was just noisy neighbors. This went on for five, maybe ten minutes until I hit the end of the section and got up for a glass of water.

And that’s when I noticed something very much like this out my window: 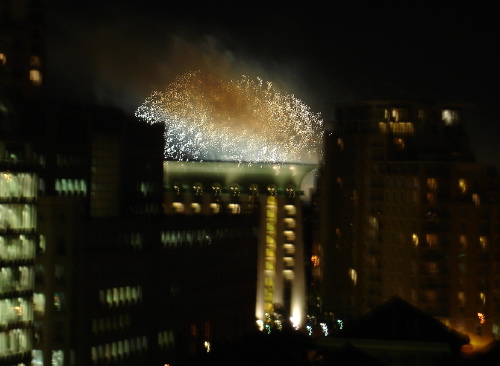 This was, unfortunately, the best shot of the batch, since I missed most of the display and then had to run for the camera and delete a bunch of pictures to make room. But this one’s kind of interesting, in a blurry sort of way: 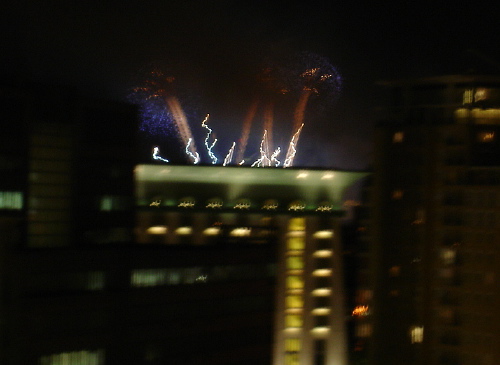 I Googled, but I can’t figure out what this display was for…it’s too early for a Guy Fawkes display.

In any case, London is the dreamiest boyfriend evar!!!

When I was a kid I was into rainbows — they were my thing. If you walked into my room in 1981 you’d see so many rainbows you could half expect to hear me chanting, “I’m here! I’m ten! Get used to it!” (if that weren’t all anachronistic and junk).

When we moved to the house in Grand Terrace my mom painted a rainbow in my bedroom, a bright bold spectrum in the company of a smiling cloud and a happy sun.

That’s the first thing I thought of when I woke up to this view around 7:45 a.m. on Saturday:

Which I thought was pretty damn cool, until I wandered out to the living room and saw this:

My attempt at pasting together a panorama shot leaves something to be desired, but you get the idea.