So hey, the music that plays over the end credits of Buckaroo Banzai…

…has been in my head lately. It just keeps popping up without warning, which wouldn’t be so bad if it weren’t also my ringtone.

If this keeps up I will have to change my ringtone.

While we’re lurching backward along Fashion’s Most Deviant Timeline, behold the (sans Shatner) cast of Star Trek with the Space Shuttle Enterprise in 1976: 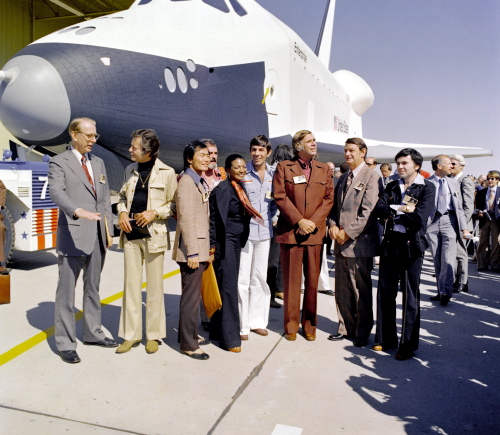 You can see a much larger version of the pic here, but alas it is not large enough to confirm that DeForest Kelley is wearing an Aquarius medallion.

I’ve made it through a whole week under my new plan to get up early to write. That would be early as is in before 6:00 a.m. most days (the only exception was 6:30 on Saturday). Of course, I’m ready to go to sleep by 9:00 p.m., but I can live with that if I stay so productive. Shocking as it is, this schedule is working well for me.

Two things kicked off this radical change. The first was a conversation with the excellent Eileen Gunn (Night Person), who said she’d been doing the early thing. I was dubious — I’ve been aware of this strategy for a long time but I find getting up in the morning so painful I didn’t think it would work for me.

The second thing is jetlag. On my first night back in GMT I woke up at 3:00 a.m. I tried to go back to sleep, but instead ended up with a story idea. By then it was almost 5:00 and I figured I might as well get up and outine it. And after that I figured I’d work on the novel rewrites I was so excited about. When I woke up at 4:30 the next morning, an idea for the rewrite got me out of bed at 5:15. And when the same thing happened again the next morning, I realized this early morning was crazy it just might work.

I didn’t blog-holler about the fact that Kris Dikeman’s fabulous “Nine Sundays in a Row” appeared on Strange Horizons back on the 27th of October, because I wasn’t blog-anything at the time. But now I am, and you should go read it. It was among my favorite stories turned in by my Clarion West class, and I’m very glad it’s found a home, especially one as good as Strange Horizons. Go, Baci Galoo!

Somehow I lost the will to blog, alas right around the time life started to get really interesting. I have been forcibly assured by many of you that Blogging is Good, and I’ve finally come around to agreeing.

For example, if I didn’t blog, how would everyone know that the 32-character limit for titles in British Airways’ On Demand movie system rendered Brendon Frasier’s latest flick as Journey to the Center of the Ear?

So, yes, I’m back, really. Let us resume the bumpy journey to the center of my ears.